By DoctorM64 - January 03, 2008
Hi. My name is Milton. I live in Argentina, where I work as a sound technician in my own recording studio. This is a project I've been working on for over two years, and now I feel it can be finished, so I decided to make it public.


This is my own remake of Metroid 2, one of the most important chapters of the Metroid saga. I always wanted to play the game with the graphics and physics of Metroid Zero Mission. So, I decided my next game would be a remake.

During the next weeks, I'll share with you the progress so far. I'll post screens from the very beginning of the project, until its present state. I also documented some of the most important aspects of the game design. 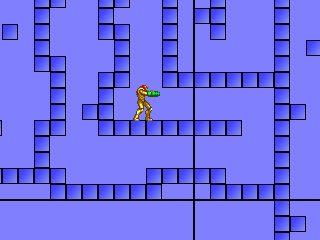 <- This, for exampe, is one of the early test builds. I am using Game Maker 6, and used Martin Piecyk's Platform Game template as a starting point. His excellent engine provided solid platform physics, and state based characters. The engine is also easily customizable, so I could add all the states I needed for Samus.


So, stay tuned for the next update, I'll show you some more screens and reveal some gameplay details.

Unknown said…
you surprise me still... Ive been watching your work for a year it seems, when I saw your first trailer, it amazed me. it made me wanting to see more of a great metroid game that would be remade. what I didnt get was though... you said you'd put up some chozo ruins preview pictures, yet i didnt see them till I went to photobucket... I liked the effect of the charge bean that you did... realistic, this is random... but I hope this'll help you in any way, if you need any pictures of the alpa, zeta, gamma, metroids, type them in on photobucket, if you didnt know...
March 17, 2008 at 12:19 AM

Anonymous said…
Congratulations doc, here on your last stretch of your project... Just wanted to say thank you for all your time and effort, kudos to you!
July 25, 2016 at 5:58 AM

Mak said…
Man I can't believe you've been working on this for so long. Kudos, congratulations and well done Doc. Thank you so much for your hard work on this series that I love so much, maybe one day Nintendo could learn how to treat Samus the way she deserves like you do.
July 29, 2016 at 12:31 PM