Showing posts from September, 2014
Show all

By DoctorM64 - September 24, 2014
One of the benefits of working with Game Maker Studio, compared to older versions, is that I can build updates much more easily. This means I can do bug fixes and release updates more often than before. This is the first update, tackling some issues you reported these last couple of days: DOWNLOAD UPDATE NEW IN THIS VERSION - Built without the YoYo Compiler to ensure WinXP compatibility - Music files are now available in the package for customization - Updated health pickup sprites - Fixed music crossfades playing part of the wrong track - Fixed collisions of spiked plants in Area 3 - Fixed missing keycodes on the keyboard settings screen - Fixed music not being played if you enter the sound options with volume 0 - Fixed very low music volume resulting in glitchy playback If you had trouble getting the demo to run in Windows XP, you should give this update a try. As always, feel free to report any bugs or make any suggestions here or at the forums .
51 comments
Read more 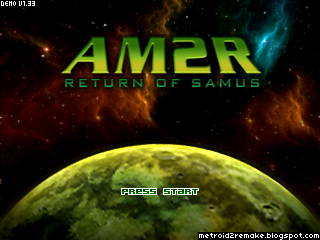 Finally, after more than 2 months of hard work, this is the biggest overhaul the project ever had. The project has transitioned to Game Maker studio, giving the game a huge performance and stability boost. DOWNLOAD HERE NEW IN 1.33: - Ported the entire project to Game Maker Studio - Many features rewritten from scratch - Plenty of small bug fixes - Faster loading times - New graphic options include fixed screen scaling and window size presets - Some tweaks in the level design - Torizo fight was balanced - Spiderball can now be activated with any of the aiming buttons You'll also the Linux version in the download page. This was tested on Ubuntu 12.10, feel free to give it a try on other versions / distros. Also, a very talented graphic artist / 3D modeler has joined the AM2R team. We're in the process of producing the soundtrack album cover right now. I'll be updating the soundtrack links to include the cover, and post the cover here as soon as it's
29 comments
Read more
More posts