Showing posts from July, 2010
Show all

Not a very exciting update...

By DoctorM64 - July 27, 2010
Progress was quite slow these weeks for two main reasons: The classic flu that strikes me every year, and some hardware problems at the studio. Before I expand on the last one, here´s what I could do: All the caves up to the entrance of the Queen´s lair are done, there´s some details left (like some waterfall effects) but it´s practically done. I also started with the regular Metroid AI, the ones you face before the queen. They happily latch into Samus, I still have to make them detach with the bomb explosions. About the hardware thing... The PC I use at the studio is also my main development computer. And a couple of weeks ago I started experiencing random system shutdowns. These started to happen more frequently, and I even had to cancel a couple of recording sessions (THAT was embarassing). I tried replacing the videocard, I bought new RAM and replaced it, but it still happens. Why am I talking about this? I just wanted to know if any of you guys experienced anything like this, th
52 comments
Read more 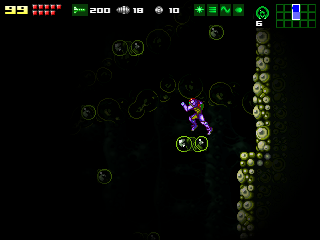 One positive thing this FIFA world cup had is that people became zombie-like creatures with soccer as their main conversation topic, motivation and concern. In some ways, the entire country was "paralyzed", expectant of each and every match, and my customers were no exception. Since I couldn´t care less about soccer, I used all this free time to finish the Omega nest. Besides the actual levels and tile work, I also updated the tilesets, adding more variety and a couple of colors to the palette, so the bubbles look smoother. The lighting effect was tweaked also, with a bigger area to make enemies and spike avoiding less frustrating. The old version can be seen in this preview . About the Super style suit, if the varia version gets finished, I might include it as an optional selectable style. It´s not that complicated to implement, and there are already some Super Metroid gameplay options already. Up next is the final area, and after that a lof of AI coding, testing and tw
88 comments
Read more
More posts