Showing posts from September, 2015
Show all

Area 5 is getting big 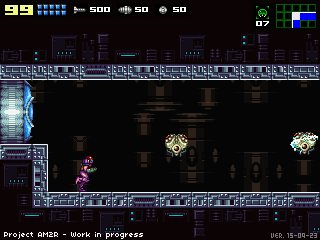 While playing AM2R on the go sounds really cool in paper, I left the whole Android port for later. It's very likely that this port will work with bluetooth controllers only at first. Touch controls are a science that requires a lot of research and experimentation. Right now I prefer to spend the few hours of free time I have on completing the game. Progress was pretty steady this month. Area 5 is feeling a lot better, the new layout introduces the new mechanics and enemies gradually, and there are some tricky rooms to overcome, even with all the equipment you have at that point in the game. For every revision the area gets, more rooms are being added. It's starting to be a pretty big place. Also, there are going to be Metroid fights, making the area non-optional, as it was once planned. Some Metroid encounters are going to be very intense. A sneak peek of how the main facility of Area 5 looks like now. There's many small details to iron out before the testing ph
87 comments
Read more
More posts