Showing posts from May, 2009
Show all

By DoctorM64 - May 29, 2009
First of all thanks for all the birthday greetings, they cheered my week up. Anyway, here´s the new video I promissed. You can watch the YouTube version here: Or, you can take a minute to download the high quality 60 FPS version (Requires XVid codec): Rapidshare - MegaUpload - MediaFire Basically, the video shows a comparison between the original and the redone versions of some places and events. There´s some old footage from past videos, re-recorded with the new tile sets. Oh, and you can see a Gamma Metroid, finally. Have a good weekend.
88 comments
Read more

Working on the new trailer

By DoctorM64 - May 25, 2009
Last week I visited a friend of mine, who showed me some footage he created with After Effects. That woke up my curiosity, and I started some research about its capabilities. The feature that made me drool was support for 60 FPS video. I thought of making a high quality version of the trailer before, but that framerate wasn´t supported by the programs I use regularly. I tried it out, and the result is impressive. So, the bad news is: there will be no trailer this week. The good news: I´m re-recording all the previous footage in 60 FPS, and I´ll make a high quality version available for download (in addition to the butchered YouTube version). The video size will be 320x240, making it any bigger would distort the pixels. The original plan for the trailer was to show some updated areas, and some new ones. I revamped the tiles of some places, with the method I told you last time, and added some new backgrounds. There were places and features that were functional, and now they are also go
19 comments
Read more 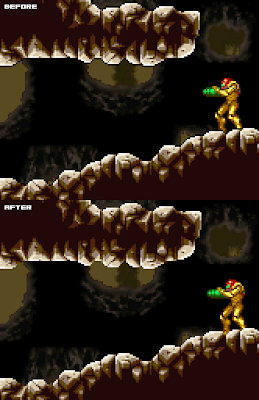 Things are up and running again, not as good as before, but enough to bring food to the table. I manage to work on the project for about an hour a day for now, so progress is starting to be steady. Before starting with area 4, I´m changing the layout of some parts of area 3. Specially the lower parts. Many Metroid fights are too cramped, so I´m making slightly larger rooms for more exciting Gamma fights. I´m also editing all the Zero Mission based tileset to remove the black outline, so they merge much better with the background. The outline really helps in a handheld screen, here it looks quite cartoony. I´m recording some material from the original game, and some unseen parts of AM2R to create a new trailer. If everything goes well, you´ll be meeting the Gammas on the next update. I want to thank all the great people that understood this last delay, I really appreciate your support.
51 comments
Read more
More posts