Showing posts from December, 2014
Show all

By DoctorM64 - December 24, 2014
Things are going pretty smooth in Area 4. The scripted events are becoming a bit more complex and awesome than the original plan, but the extra effort is going to pay off. There's still some balancing to be done to the miniboss, and music production is a bit behind schedule for that particular area. But the place is starting to have its own personality and atmosphere. Area 5, on the other hand, is very likely to receive a complete overhaul (trying to reuse the existing rooms as much as possible), to make room for the new planned features that are exclusive to that location. I wish you have a great celebration, close to your loved ones. One of my wishes for this next year is to be able to play AM2R complete, as a full game. I'll do my best to make it happen. May your personal goals for this year be fulfilled, and most importantly, be safe and be happy. Happy holidays!
38 comments
Read more 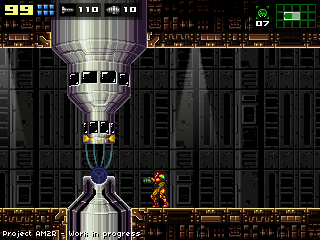 The year is almost over, again. As usual, preparations for the celebrations, gift shopping and those kind of things are taking most of my free time. But there's been some solid progress lately for both areas 4 and 5. I'll just let the pics do the talking: Area 4 now uses a brand new custom tile set, giving the place a lot more personality, compared to the older revision. There will be some interaction with some machinery, as you might expect. The outside part of the tower was also given an original tile set, custom made for this huge structure. And last, but not least, I started revamping the old Power Bomb animation. Up to last week, the power bomb looked like in the first trailer, with coarse polygon edges as the explosion expanded. Now it looks a lot smoother and pretty devastating in-game. Most of Area 5 doesn't have proper backgrounds yet, so I guess I'll be showing you those places in a later update. There were also some small optimization
50 comments
Read more
More posts