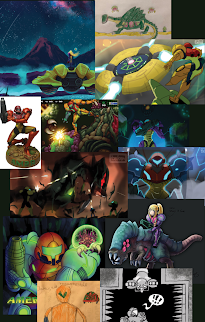 Lucas deep said…
Just played Grime, Hollow Knight, and Ori. All inspired by the original Metroid 2D universe of gameplay. Love the fact Nintendo stuck to the original formula. Why reinvent the rolling sphere? ;)This is probably the best Metroid gamee ever made, after beating this, I can say that with full confidence.
October 30, 2021 at 3:09 PM

Unknown said…
I remember when I first caught wind of a fan made remake of metroid ii and seeing a really old map of the "new area" way back in 2012 or so and it was mind boggling. 2d netroid was my favorite so it was incredible to play the "zero mission" of metroid ii. Am2r totally has a Nintendo feel to it so it should be widely considered a legitimate metroid entry. As you said about fans "reverse" engineering and adding mods, I wonder if it's possible to port this game onto a cartridge of sorts, like a super Nintendo or n64 cartridge. It'd be surreal to have this game on a physical copy and play on a system with av cables instead of on pc or laptop. I guess connecting a laptop to hdmi port on a TV will do for now. But to me thus is the only metroid game that doesn't exist in physical form. I think if hacks of super metroid can be made on cartridge why can't am2r see physical form? Its too good to stay entirely digital.
December 6, 2021 at 4:32 PM