By DoctorM64 - January 19, 2008
December 2005, the game is starting to shape.
It took almost a week to understand the engine, and to start modifying it without beaking anything. I tweaked the animation system, now it flipped the sprites instead of having a left and right version of every sprite. I added the first custom states: Morphball and Spinjump. 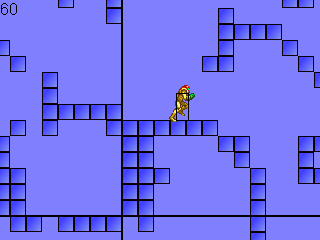 One of the first test rooms. 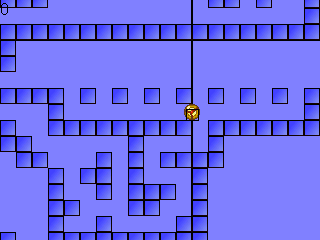 Trying out the Morphball.
The new states worked really well. But before adding anything else the few elements already done should be working correctly. So, instead of adding more abilities, I tweaked Samus´ physics to make the game feel right.
Emulation is a great tool to understand how things are made in games. So, I used VBA to take a closer look to basic things. I took frame by frame snapshots of the basic actions, then arranged them using Paint Shop Pro and compared the changes between frames. This revealed how fast Samus runs, how many frames does it take to morph, powergrip, etc. 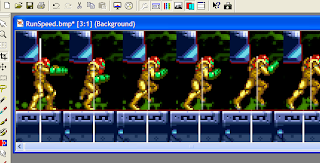 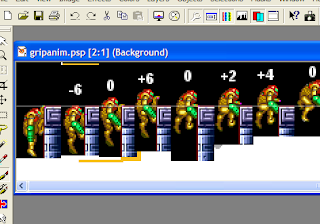 The powergrip animation, vertical sprite offsets of each step.
This helped a lot to establish a goal regarding basic gameplay. All the subsequent tweaks were now heading to a clear direction. I knew what I was looking for.
emulation gameplay screenshots